The race, it was such a crazed week leading up to this race and I don't think I was ever so unprepared for a race, mentally and physically. I had not planned for anything and I made motel reservations just before I hit the road at 5:00 PM Friday night. I ate pasta salad as I was driving down on I87 as I didn't have time to stop anywhere. I finally got in to some motel at 10:00 PM, about 30 minutes from the race. To bed by 11:00 PM only to be awakened by someone next door at 2:00 am looking for some chick in the "white dress". So sleep was not plentiful either. I blew out of the motel at 4:30 am and barely made it to the race start in time. Luckily someone saw me at a light heading in the wrong direction at the entrace to Bear Mtn. and redirected us to the start or I would have missed the start. In a fog at the start, I just followed in a crowd of a dozen or so. Blew through the first aid station. By the second aid station at mile 8.9 or so, I was still with the first pack of 12 or so but took my time and decided to do my own thing and got out behind everyone. Finally was running more comfortably and just going along. Then one by one I was picking off runners throughout the race. At mile 28 I couldn't believe it was only 28 miles. I thought we were well over 30 miles at that point and had to conserve on the fluids I was carrying and electrolyte pills as I was getting low. Meanwhile, I passed the 4th place runner who was cramping. Then there were three more, Leigh, Brian and Ben. It seemed like the three were at least 15 minutes ahead. Not much hope unless they bonked. These were the same three who were ahead of me at Seven Sisters and I knew they were running strong. On I went, then had some bad stomach cramps, visited the woods and on again. Oh well, I kept going through the mud and muck. Finally finished in fourth place behind Leigh, Brian and Ben, in that order. I felt ok during the race but not very energized. I hadn't slept good for weeks and usually I find sleep is critical the week before for me. I have to figure out how to sleep more. Maybe if I have more closings, sleep would not be such a problem. Anyway, another 50 done, fair performance on my part. I still feel like I haven't had enough good trail running yet this year. But hey, at 50 I won my age group and set a new master's and age group record. So what if this was only the second running of the race. Won some good Northface bootie but no $$ as only the top 3 got that. And got a picture with Dean Karnazas. Body feels fine and I ran a nice 10 miler two nights later and 20 miles the next night. I guess I didn't push hard enough during the race. Ankle is still swollen from 7 Sisters and I did wear a brace for the entire 50 miles which helped hold it together with only minor pain and difficulties. And thanks to Mizuno for the terrific shoes and gear and to Amino Vital for the Enurance Formula drink that keeps me going.
Posted by Unknown at 11:10 PM No comments: 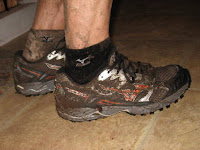 Next up could be the Seven Sisters in Amherst, Mass this weekend. A bony, rocky 12 miler along the Mt. Holyoke Range. Then the following weekend is the Northface 50 miler at Bear Mtn. in NY. The entrants list is filling up with some big dogs from all around, I think because of $$$ being offered for prizes. Team runners from North Face and Inov-8 will be there. Should be fun! Then two weeks later is the Vermont City Marathon. I've been "invited" to VCM again so I'll get some special treatment. I like that, especially being able to have my own water bottles at the aid stations.
Posted by Unknown at 8:04 AM No comments: