POST UTMB: Training Continues and so do the races

The Dolomites of Italy and the Return to Home


Immediately after the Ultra-Trail du Mont-Blanc I hit the road and ventured to the Dolomites of Italy to check out some areas that I had always seen in magazines.  It involved a lot of driving which included an all night drive but that was ok as a little sitting after running UTMB was ok.  I had a 6 speed on the floor Mitsubishi Lancer that made the mountain passes a blast to drive on.  I felt like Mario until I was passed by not only motorcycles but also some impatient Italian drivers who knew the roads better than me.  My first destination was Agordo, Italy.

This was a rather rural older village in the foothills of the Dolomites.  The Alta Via Trail went right through the high peaks which is where I would attempt to go after feasting on some Italian morning pastries and grabbing a loaf of fresh bread to bring along on the trail.  I found a small road that lead up into a mountain pass.  It got rather steep, narrow and rough so I found a parking area down lower and walked up the road a ways in search of some new trails.  As I was walking up the dirt mountain road, I noticed a lot of signs with numbers on them.  They seemed to be in numeric order so I assumed they were address numbers as most were next to small mountain villas.  Later I realized that those signs were more trails that went through these mountain villas and into the hills above. 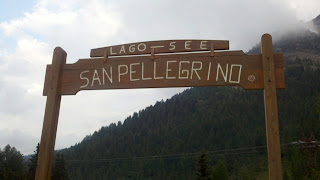 I found some awesome trails and a never ending system of trails.  Being rather sleep deprived from the night drive, I made it an easy day and came back into Agordo after 4 hours or so to enjoy a real Italian pizza.  What a treat!!  I never had a pizza like this.  Light, almost pastry like crust with tomato and Gorgonzola topping.  I ate the entire pizza while enjoying an ice cold beer :)  Afterwards, I headed out to find another trail head to run the Alta Via the following day.  I wasn't quite sure where I was going except through more mountain passes.  I took a wrong turn and was on unfamiliar territory which brought me to the Pellegrino Pass.  I had to stop there as part of my Italian heritage is Pellegrino.  I soon discovered, this was also part of the Alta Via trail network.  Excellent, a place to hang for the night and a starting point to venture into the mountains in the morning. 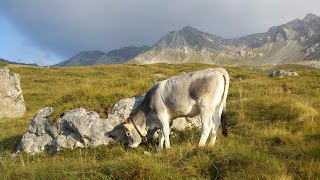 A night of car camping after enjoying some fine Italian wines at the local wine bar and then up early the next morning to head into the hills.  There were cable cars and lifts to take you up a ways but I was out before they were operating, not that I would have ridden a lift up when I could run up instead.  I discovered a whole network of trails again and found the Alta Via # 637 which I followed.  After about 45 minutes passing cows with bells and nice rolling terrain, I arrived at the rocky section of the 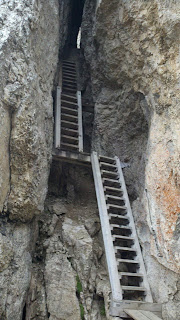 trail.  This got rather interesting with steep rock faces with ladders and cables to hook onto.  Only problem, I didn't have the speed harness to hook on as was recommended.  Not a problem.  The magazine ads showed nice rolling high mountain trail running in the Dolomites but never mentioned the technical sections that one would have to go through.  Some sections contained caves where the trail would go through in total darkness.  I would carefully walk with my hands up hoping I wouldn't fall through some hole into eternity.  This section was also part of the Italian front line from World War One and remnants of the line still existed on the trail along with war memorials.  Other sections were so steep I was hoping I wouldn't have to go back down.  Luckily I found a way to loop through and kept going.  In the end, I did find some incredible parts of the trail system just like in the magazine ads with rolling high elevation trails among the steep Dolomite peaks.  Some day I would like to return to do the complete Alta Via trail going hut to hut and fully enjoying the Dolomites of Italy.


After day 2 in the Dolomites it was time to drive back to Courmayeur, Italy for the night and get ready to fly back to the states the following morning.  The drive back was long but at least it was still daylight so I could enjoy the Italian scenery.  Italian Villas everywhere!  Looking for a castle or a villa, call Jack Pilla!  That's all I kept hearing.  In Courmayeur I enjoyed another fine Italian dinner, lasagna.  Another incredible treat!  And
enjoyed the company of Bryan Powell and Meghan on the outdoor patio of some fine Italian establishment.  Up early the next morning to fly out of Geneva, Switzerland and back to the states.

It was nice to get back home, sort of.   I had an unforgettable journey in Europe but now it was business as usual.  And of course back to the local race schedule.  First up was the GMAA Archie Post 5 miler.  It's is a point to point FAST race.   Usually I run it at about a 6 mile pace. This year, after UTMB, I was hoping I could run near a 7 minute mile pace.  I figured this would be a good way to get the lead out and fire up the fast twitch muscles.  Oh, did it hurt but I was amazed.  Coming across the 1 mile mark I saw a 5:53.  I didn't think I had that in me.  I did slow down later on, especially where the second half of the course is up hill but I managed to average around a 6:10 pace.  I did pay the price the next day as I was extremely sore.

Next up the following weekend was the GMAA Common to Common 30K.  Another test of the fitness and energy level.  A fast rolling course on the back roads of Essex and Westford.  I just signed up for a mid October marathon so I figured this would be a good training run.  And it hurt too.  But I was able to average a 6:30 or so pace on rolling hills so hopefully I can hold that for a flat road marathon in a month, we'll see.

So back to the local running schedule and recovery from UTMB although not much time to recover.