Another full month beginning with rain, finally some hot and humid summer weather and now cooler temps. More of a recovery month for me as feeling a little burned out from the 100 last month and many miles and races leading up to that. No running plan to follow but I seemed to still crank out the miles with over 430 for the month. I guess not much of a recovery but raced only in the local Tuesday night 5 k trail races at Catamount and the GMAA 5K XC Scholarship run held at Redrocks Park. Came in first in my age group with a time of 17:56. Not really being a short distance runner, I was pleased. And my new secret weapon for the xc races, the Mizuno Kaza XC shoe with SPIKES. Wow! They are fun. Thanks Colin! First day I had them I ran 10 miles of trails to break them in for the Scholarship run. They were different than my usual Mizuno Trail shoe but so light and you can feel most everything, which I kind of like now. And they look good too, bright yellow. It just makes you feel fast.

During August I also had some nice longer training runs, one of my favorite being the round the mountain loop which starts at Stevensville Rd. in Underhill and follows the Long Trail to the Trout Club, then along the Catamount Trail to Trapps to the Haule Rd and over to the Mansfield XC Center, then up the Toll Road to the Chin, VT's highest point, then heading back south on the LT and back to Stevensville Rd. by the Notch Brook Trail. Some good runnable terrain and some great hills and a little bit of scrambling along some rocky sections with ladders. Overall a fun run, especially along the rocky ridge of Mansfield. 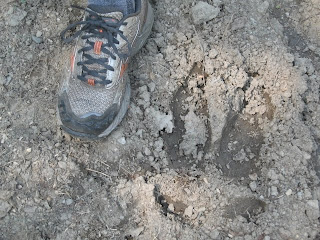 Kept up with the Catamount Wed. night bike races for my crosstraining. Fun times too but I seem to crash too often. Maybe it's because I've been using a vintage late 80's Diamond Back Tapanga. Overall it works great even with the Bio Pace technology but it has no suspension so I tend to bounce a bit. I had some good crashes and head-ons into trees but the last race I did the Superman over the handlebars, landing on my side HARD. Weeks later, I can still feel it. The rider behind me said I looked like a rag doll when I hit and the rider in front heard the crash but was afraid to look back at the carnage. Still I got up and continued to ride and finished 2 more laps. If I didn't I think I would have hurt more.

Some of the other crosstraining I did was at Vermont Skydiving, for mental preparation and to relax. I also do the Superman there too as I exit the plane but not for landing purposes.
That's it for August. Til next month.
Posted by Unknown at 3:19 PM No comments: