30,000 Consecutive Miles in just over 7 years without a day off. That's where my Running Ahead log had me a few weeks ago.  I'm not really a data junkie and don't even own a GPS watch but the log automatically adds up my miles and consecutive days of running.  When I saw 30,000 miles it explained part of why I haven't had time lately to keep up with my Blog.  My focus this spring and summer has been to just build miles and get time out on the trail to prep for the Tor Des Geants in September.  I've been trying to learn how to pace myself for the long haul in the Alps.  So here's a brief update of what I've been doing since my last blog.

April:
Don't Run Boston 50 Mile, Blue Hills Reservation, Mass.
Had a fun run but got severely lost as this was a Fat Ass race with no course markings.  I turned it into an all day run with my only goal of getting out before dark.  I ran in circles for 11 1/2 hours and must have run 60+ miles.  It was a good training run.

Boston Marathon (pacing):  The day after DRB, I was on course at the Boston Marathon to support Kristin and Jen who were running it this year.  I met them at mile 13 and decided to run with them for as long as I could.  I was having so much fun that I decided to go the distance with them, almost....until we were stopped with 1/2 mile to go.  Luckily we had gone a bit slower than planned as their finish time was predicted to be 4:09, just when all the activity started. 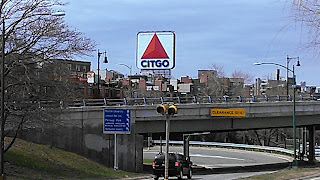 May:
North Face 50 Mile at Bear Mtn.  A good technical 50 mile run in NY state.  I went down with an open mind and no real plan.  Met up with Matt Wilson and Josh Finger and ran most of it with Matt.  I fell apart around mile 40 and slogged in to the finish.

Vail Colorado:  This was a last minute trip to Vail.  Was there for the Pearl Izumi national sales meeting.  Found some awesome trails at around 10,000 feet. 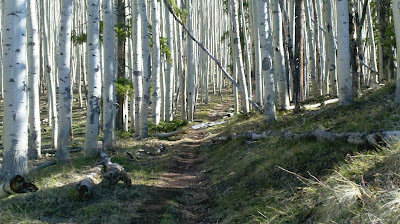 Vermont City Marathon: Again this year I was in charge of the Pace Groups and again ran the race at the last minute once I knew all the pace leaders were in place in their start corrals.  And it was wet and cold.  I wore a garbage bag for the first 7 miles.  Tired legs were screaming at me by mile 10 but I somehow managed to pull off a 2:56 time.  Still happy to be able to keep it under 3 hours :) 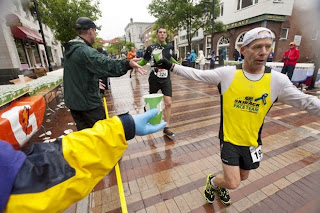 June:
Tarc 100 Mile, Weston, Mass.  I needed another 100 mile training run and found this race at the last minute and this was an easy drive to get there.  Kristin and John would be running the 50 mile as they had the VT 100 in a month.  Course was incredibly wet with lots of deep water and mud.  7:00 pm Friday night start was fun too.  Just after the darkness set in, around mile 12 I tried to avoid a rather large mud pit and tried to run alongside in the giant ferns.  Not a good idea, the fun ended.  Behind one of those giant ferns was a solid object like a stump.  Hitting that solid object with my upper right thigh brought out stars and loss of breath. After walking in a stupor for a moment I continued on trying to ignore the pain.  By mile 35 I could see my leg was swollen.  At mile 50 I went to the medical tent.  The person I chatted with didn't think it was broken so I had him wrap it up with a large compression bandage and out I went.  By mile 70 I could barely walk and had to drop.  Thought I broke my femur as it swelled up over the next few days which made running a challenge but after a week I was running normal again.

July & August:
No major races.  Weekly 5k trail races at Catamount Family Outdoor Center and the same at Trapp Family Lodge and some mountain bike races too.  And lots of mountain miles, mostly up around Mt. Mansfield and Came's Hump.  Hit Mt. Lafayette in NH too.  I'm trying to slow down my pace and learn how to run up mountains with sticks and keep a good solid pace throughout.  And an occasional jump from 13,000 feet.


That's the update.  Between running, trying to build a house, preparing for this race and some other very important personal matters, life has been very busy but good.  Oh yes, I have to work too. 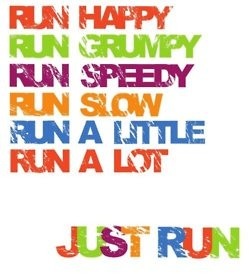