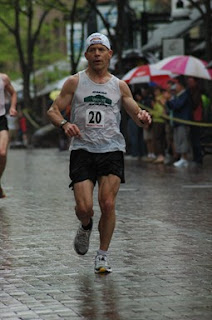 VCM is always a fun event. It's a well organize race and the local crowds couldn't be any better. Although non-local runners get tired of all the cheering I seem to get from friends all along the course. This year seemed like most, cool and overcast in the morning. But just as we started the light rain began. It didn't feel so bad at first but it just continued and came down harder and harder. By mile 10 while running through the puddles on Pine St. I had enough of the water. I felt like I was running with an extra 10 lbs. Other than the rain, I had the pleasure of running the first half of the race with Tony Bates and Allen Mead. Both great master runners. During the second half I was able to run with Todd Archambeault for a bit. Still a younster but getting faster and stronger every year. After the midrace blues I seemed to feel better, maybe because the rain let up and I kicked it in a little on the bike path to try to make up for some lost time. In the end I was about 1 minute slower than last year but at 2:48 I was winner of my age group and 4th master overall. I'll take it. Immediately afterwards, I grabbed a quick bite to eat and went back out to run the second half of the course again. I caught up to the last runners and chatted and then little by little continued upon more runners. I had a blast talking with the runners and tried to help them out if needed. The sun was coming out and it was getting hotter so the runners where starting to feel the heat. I even had to give one runner who was cramping some electrolyte pills. Something I usually have with me.
Thanks to Zeke for having me part of the Elite Runners again, what an honor. And a big thanks to Colin and Mizuno for supplying me with excellent running gear. The Mizuno Alchemy 8's were the perfect shoe again for the 40 miles I did that day and the clothing was top notch as usual. And great timing on the cap, just what was needed for the early rain and the second half sun. And thanks to Amino Vital for their special drink mix, the Endurance Formula, which keeps me going for hours and hours.

This was the 26th running and my third consecutive running of the Nipmuck Trail Marathon and as always I had a great time. I drove over the night before and found a nice spot along the back roads to car camp. The Nissan motel works wonderful especially when I can fit a large foam mattress inside. As the sun came up, I awoke and drove to the race start, only 1/4 mile from my motel landing and got a great parking spot since only a handful of volunteers where there at 6:30 AM. The weather was overcast but not bad at all. By race start at 8:00 am we all were gathered for the race director's meeting. Dave this year surprised us all with a warm up song. As we started out on the race, a small group of runners immediately took charge. Ben Nephew was leading and never looked back. I was in a small group for a short time and then settled in behind Jim Thompson. After about a mile, I passed Jim in an effort to try to catch Ben. I was feeling good until I came to a 4 way intersection with no idea where to go. Lost again, it happens every time. I went left, then right, then straight ahead and finally saw a trail marker on a downed tree. A minute or so lost but on track again. I ran the rest of the race by myself. During the second half I got lost again. I recognized the spot but couldn't remember where to go and had to backtrack a bit until I found the trail again. Just another day in the woods. The last few miles, I had no idea how far I was from the finish. I misjudged where I was and was thinking my time would be slower than the last two but suddenly I saw the road up ahead and the finish line. Done! And it was actually my best time for this race. I finished at 3:25: 49, almost three minutes ahead of last year came in second place overall, first for masters but the biggy, I set a new age group course record by almost 15 minutes! Not bad for an old guy. There were some funny comments from the other runners, one being Jim Thompson:
"One mile in, I had someone on my back and close. I pulled aside and let them pass. Judging by the sound of their voice and the look of their body (from behind), I was sure this runner was in the sub Masters category and so I let him go without too much of a care. My goal afterall was to win the Masters. But right before the first turnaround at six something miles, I got a look at the two people ahead of me. The leader was a baldheaded rock star hammering like a diesel engine through the Connecticut woods and not too far behind him was the man in second place. He was blasting it too but to my bitter frustration, I found him to be not some young Turk but a gray haired guy with a few wrinkles and clearly over 100,000 miles on his engine. It was Jack Pilla, 51 years of age and a total running stud. I knew right then I was in it for third or worse".
And another by Scott Livingston:
I glanced at the results and was really pleased to see that two age group records were set. Jack Pilla, who is 50, had an incredible 3:25:49, good for 2nd place overall. His Grand Tree percentage was 93.35%, which is amazing considering that the winner, Ben Nephew, is 17 years younger. At about the five mile mark, I chatted up 55 year old Rob Higley, who is no slouch. We talked about Jack and how darn fast he is. Rob called him a “real runner.” Rob finished 4th, so no one is crying for him. Heck, compared to Rob, Jack is a puppy. They are both real runners in my book! 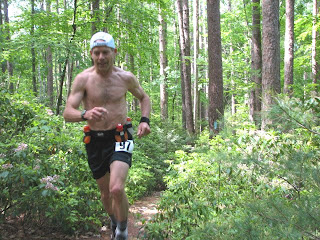 So another day, another race. Thanks to Mizuno, the Trail Ascend 4's were great! And the rest of the Mizuno Gear worked equally as well as always. And thanks to Amino Vital for the Endurance Formula drink mix to keep me going for hours again.