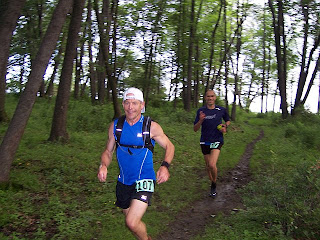 
Despite the difficult course conditions, there was no home course advantage. Visitors dominated the 50K, taking the top six overall and top two women's places. Jack Pilla (age 51, from Charlotte, VT) had a dominate win. Joe Carrara (also Charlotte, VT) finished second and first in Masters in 4:40:26. Marc Buckwalter (Lititz, PA) was the only other runner to break 5 hours, finishing third and first in the Open category in 4:53:43. Carrie Lombardo (Middletown, CT) was the top woman and winner of the Open category, finishing in 6:01:03. Stephanie Wilson (Oakhill, VA) finished a very close second, wining the Masters category in 6:05:40. Theresa Palmieri (Buffalo) won the Veterans category with a 6:33:17 finish. Theresa was the only category winner from New York. 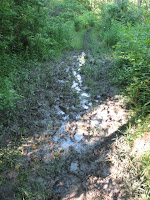 Here are the full results: http://www.wny-ultra.org/finger-lakes/2009-results-finger-lakes-fifites.htm

As reported by Jack:


Yes, it was muddy. It doesn't get much muddier than this or for as long. It made for slower going and each lap around caused the trail to deteriorate further. Oh well, this is trail running. A little more friction, more slip and slide. Luckily for me no falls and I didn't get lost and there were no bugs!

At the start of the race I went out with Joe and Yassine down the road. By the time we hit the trail, it was Yassine and myself. We had a great first loop around in and out of the mud. In the first cow meadow after the Blueberry Patch area we came across our first obstacles, cows and/or bulls and a lot of them. They were starting to get active as we were coming across, with some running across the trail. But dead ahead were two huge butt ends directly on the trail. Yassine and I started yelling and making a lot of noise. Slowly they moved aside watching as we went by and we carefully kept an eye on the rest of the herd moving about. Soon we were back in the trees and out the gate. Don't forget to close the gate, that's the rule. On we went. The rest of the first lap was just more mud and muck with Yassine and myself chatting about. Soon, the first lap was done. One more to go as I was only doing the 50K this year. Yassine was planning on doing the 50 miler which meant one additional lap for him plus another short lap. Going through the start finish, we quickly grabbed any needed supplies and were out of there, on the trail again. Yassine bolted out of there quickly while I followed behind trying to get a shot block out of the wrapper. Those things are tough to get out. After about a 1/2 mile, we crossed a road and started up and in the mud. At that point Yassine told me to go by and get going. Since he was doing the 50 miler I figured he was slowing down the pace a bit but with only one more lap for me, I took off. I was also trying to beat the course masters record of 4:13 but knew it wouldn't be an easy task with all the mud. And the first lap at 2:05 was already slower than my first lap last year so this was really going to be a challenge. The rest of the race, I basically ran alone with the exception of passing some of the 25K runners along the way. The mud was thicker and deeper than the first lap and the best way to go seemed to be directly through the middle. There was no going around the side to avoid it in most cases. I had another cow/bull scare just after the Blueberry Patch meadow where they were coming out of the trees this time. I just kept moving along, trying not to look. By the time I arrived at the Beach, I knew the course record was not obtainable this year as I had to make it back in 10 minutes to get the record. First lap took 12 minutes from the Beach a 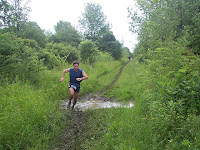 nd this lap was slower with the mud. Oh well, there's always next year. So onward I went, thinking about the food at the finish. The last stretch to the finish was only a slight uphill but the mud was so slick, it was hard to get any kind of traction but I just bulled through as best I could. Finally the finish, but also thinking in the back of my mind why not keep going, they give you the option. No, not this year.

So there it is, another 50K down with a first place finish and about 3 minutes off the masters course record. Shortly thereafter Joe Carrara came in for second place. Joe is also from Charlotte, VT and is my pacer at the VT 100 and has 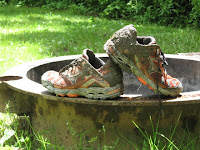 been for years where he kicks by butt to keep me moving after mile 70. The new Mizuno Wave Cabrakans were awesome. Thanks Colin! With the new tread design and rubber spikes, it certainly helped as much as possible in the mud and muck. Nutrition for the shorter 50K wasn't an issue either, especially with the cooler temps. I drank the Amino Vital Endurance Formula for the second lap with the added calories, ate some Gu's, a Shot Block and my electrolyte pills.
Posted by Unknown at 11:26 PM

Great report. Congratulations to both you and Kelly.

I agree about going down the middle of the puddles. I assumed it was the smoothest part of the trail under all that muck!

All the best at Vermont.