As posted in Ultrarunning Online 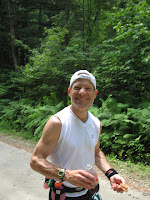 South Woodstock, Vermont, July 19. Jack Pilla of Charlotte, Vermont won the Vermont 100-Mile Endurance Run today at age 51, which is believed to be the oldest winner of a major 100-mile run ever. Pilla finished well clear of a pair of 28-year-olds for the win.

Stephanie Case of New York City was the women's winner, besting Jill Perry and Serena Wilcox for the win. The race was held under ideal weather conditions, with partly cloudy skies and temperatures reaching only the low 70s. Heavy rains on Friday did create several sections that were more than a little muddy. Of the 249 starters, 176 finished within the 30-hour time limit.

Jack's Race Report
It started out as it usually does, warm and humid with threatening skies for the wake up call at 3:00 AM which was an improvement from the rain overnight. Not a bad sleep either although the Larson family was a bit active and the car alarm at midnight woke me up. At the 4:00 AM start I was looking for some familiar faces to run with. No Andy, Glen, Todd, Kevin or Joe to follow, so how to pace myself? I found Brian Rusiecki and Chad Denning and recognized a few others. Off we went. There was a rather large group initially moving along at a good clip. I knew I wanted to get to Taftsville in about 2 hours and Pretty House in 3 hours to stay on track with the last two years but how to pace? Soon I found myself in front of the group, leading the way as we headed into the woods. Not what I was hoping but I was feeling comfortable in my pace and figured why not keep going. As we went along I could see the group thinning. By the time we got to Taftsville, I could see we were just over two hours, close to what I was hoping so I figured my pace was good. With me was Jason Lantz and right behind was Chad Denning and Wynn Davis. Somewhere Brian has dropped.

As we came into Pretty House we were just under the 3 hour mark so I knew we were on pace for a decent race, if there were no major issues. I also knew the easy part of the course was over and from here on in, we'd be getting into more hills. On we went at a good pace but walking some of the bigger hills. As we were slowly going up the big hill after the Lincoln B aid station, another youngster came cruizing by, running up the hill. This was a big hill and I usually look forward to it as I can rest going up for a change of pace. In years past I've been known to slowly run backwards up this hill. This young guy, not only did he leave us in the dust, and I expected to see him near the top but I think he ran this whole hill like it was nothing. WOW! We were all rather amazed. Not far behind was Brian who had caught up to us and was passing too. I figured I had better pic up the pace too so I followed along and so did Jason. We finally figured out who this young fast guy was, Jim Sweeney from Albany. Yes, I recognized the name. Young fast guy, but his first 100, could he go the distance? Only time would tell. I've learned over the years to just run my race, and if it 's my day, then so be it. Brian, Jason and myself ran along to Camp 10 Bear, weigh in time. No issues for me this year, only lost 4 pounds or so. I did a quick sock check as I thought I had blown out a toe, but no, so I tightened up the shoes a bit and off we went. Somewhere along the way to Tracer Brook or so we lost Brian again. Jason and I were cruizing along chatting and helping each other out at aid stations. No signs of anyone else and Jim was 4-5 minutes ahead. We had the long slog up to Margaritaville in the heat of the day with the sun coming in and out. It was hot with the sun. Jason was slowing a bit and after a quick refueling I was gone with Jason behind. Eventually he caught up and were were running together again. At the next aid station I was told Jim was about 4 minutes ahead. Hmm, slowing? We were told we had 5 miles of downhill to Camp 10 Bear, but why was the hilling still going up? Jason and I moved along but eventually I left Jason. The next few miles was a fun downhill jeep trail. As I was about halfway down I noticed someone up ahead. I was amazed to see Jim. When I caught up to him I asked him if he was ok. He said he trained hard for the uphills but didn't for the downhills. A big mistake for many who think VT is easy. His downhill quads were toast. So off I went, in the lead again.

I made it into Camp 10 Bear for the weigh in again. Down 7 pounds, not unusual for me but of a little concern to the medical staff. Dr. R came by, had a look at me, and gave me the go ahead. A grabbed my pacer Joe Carrara, (4th year as my pacer), got some supplies and off we went. Just as we were leaving Jason came in. Joe and I quickly left and prepared for the next few miles of uphill slogging. Any time I walked up a hill, Joe would say, "You ran this last year". After a few miles or so, Joe saw someone coming up from behind. It was Jason. He had a good climb out of Camp 10 Bear and didn't have a pacer. So the three of us were off and running. We had no idea where any one else was. That's the problem of being in the lead group. Over the hills and through the woods, viewing some inxcredible real estate, running and walking some as Joe lead us around. At one point I had to pull off the trail and announced I just have to puke. I was a bit nausious from swallowing electrolyte pills. Mostly a mind thing. As soon as I would put take a pill out and put it near my mouth, dry heaves would start. This time I had it in my mouth but it was out in a second with some other contents. I'll wait till later and try again. Luckily the day was getting on and it would be cooling off, ho 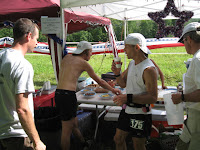 pefully. The three of us kept on going at a good pace although at one point my pacer, Joe, had to visit the woods as a result of too much Red Bull. It was hot, sunny and flat and as soon as Joe was out of site, I stopped running to take a break and so did Jason. Joe would never let me do this so I thought I would take advantage of the situation just for a brief moment, also knowing a big hill up to Bill's was coming shortly. Just before Joe came out of the woods, we started runnng again. The long climb up to Bill's was still long and hot but getting to Bill's is always a good feeling. Between mile 70 and Bill's (mile 88) I always seem to take easy, trying to keep some in reserve for the last blast and big hills to come.

At Bill's, did another weigh in, not bad, only down 4 or 5 pounds. Did a quick sock change as I did blow out my socks this time on some of the downhills, refueled and Joe and I were gone. Jason was still at Bill's getting himself together. Coming out of Bill's is one of my favorite parts. Some great downhill stretches, which if you hadn't trained for could destroy your quads b 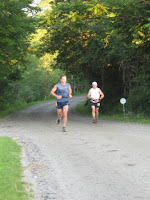 ut I was ready. This is why I train, running up and down the Toll Road at Stowe. We cruized in high gear. After the downhill comes some big uphill section. Again Joe was on me, "You ran up this last year!" We were steadily going along on the ups and flying on the downs not knowing if anyone else was around. Coming in to Polly's we grapped headlamps just in case but if all went well wouldn't have to use them. Joe was becoming very chatty at Polly's, wasn't yelling at me to get going so I had to take charge and push Joe out. Only 4 1/2 miles to go and I didn't want to lose it after all this time.

The last 2 1/2 miles is a fun section through the woods, but very muddy this year. We were even runnning up hills, until I hit a huge mucky section, slid and both legs went into cramp mode. Joe looked back and saw me holding on to a tree. I assured him no problem, stiffed legged myself back on the trail and cautiously continued after downing a couple of electrolyte pills. Slowly I worked myself back up to speed. As we were almost to the finish, a group of kids joined us on the trail all excited. They ran with us to the finish, yelling and cheering which was a lot of fun. And there it was, the finish line, what a good feeling, done! A few accomplishments from the race, First Vermonter to ever win this race, new age group record and believed to be the oldest winner of a major 100 miler, ever. It's not bad being a senior!

Special thanks to my pacer and good friend, Joe Carrara who knows how to keep me going. And to Mizuno for the awesome gear including the newest trail shoe for this race, the Wave Cabraken, a real winner. Thanks Colin! And to Amino Vital for fueling me along the way with the Endurance Formula.