May  7. 2011
Of the three 50's this spring, this would be the most technical.  This would be my third running of this event and although it is not a fast 50, it is fun if you respect it.  For me, the question would be how much energy would I have.  My kick a... job was still draining my energy from early morning risings and physical energy spent at work.  Whatever, I went into this event knowing it would be a great training run for later events in the year.
Arrived at the site the night before and car camped in the F-150.  Worked awesome!  Got up in the early morning and jumped on the shuttle to the start.  The morning started off cool but was dry which was great.  Got to the start and got my bib and ran into Leigh Schmitt.  Leigh had moved to CA last year so I didn't think I would see him this year but NF wanted him here for the event.  We chatted for quite a while and before you knew it, it was time to run.  Besides Leigh I ran into Mike Oliva, a friend from NY who I met at Western States back in 06.  I also ran into Brian Rusiecki and Amy Lane and Annette Bednosky.
The race went off as scheduled and we were off.  As usual a fast pack took off.  I was just in the back of this pack to stay ahead of the masses but wanted to settle in and do my own thing.  I felt ok but not totally energized.  But after about two miles, it was clear to me that this was not to be a great day.  The legs felt fine but the energy level just was not there.  So i backed off even more than usual and looked at this as a fun Sunday run.  The course was in great shape, drier than in years past.  The temps seemed reasonable so far but would be warming later on.  So I did my thing and ran along.  I had a number of early wipe outs on the trail but nothing major. 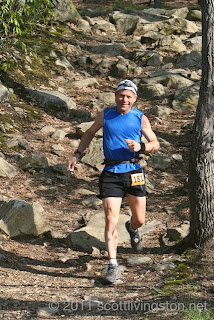 Finally after about two hours I was feeling good and started to pick up the pace.  I was passing other runners and cruising along having fun again.  Then at about mile 26, I took another fall, a good tuck and roll and kept going.  But at this spot was a sharp 90 degree turn.  I did such a good tuck and roll that I rolled right past the turn off and kept going down a gradual hill for quite a while.  I was feeling good but after a while, it was too quiet.  I looked for trail markers, nothing.  Finally I did some trail scanning and couldn't see any good footprints.  Dang!  Lost again.  I turned around and ran back up this hill, cussing that the courses are never marked good enough.  Finally I came across this very obvious turn off, which I had rolled right through and never saw, runner error.  Back on course I figured I had lost about 20 minutes.  I was again passing folks who I had passed earlier. 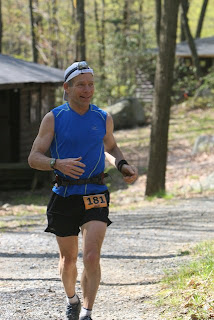 Got to the aid station at mile 28, refueled and kept on going.  Chatted with Scott Livingston too and thanks Scott for the awesome photos which I have displayed here.  At the next steep uphill I came across Annette Bednosky who was actually walking up this hill.  I gave her some grief as I passed her and we chatted a bit.  Over the past year, I have seen Annette at a number of races and she is one strong runner who I respect.  For the rest of the race, we would go back and forth.  Annette was feeling sluggish on the uphills where I was feeling stronger.  But on the downhills Annette was in cruise mode where I was more in turtle mode due to sore feet and PF.  When we got to the road section with the long gradual uphill, I took off and didn't see Annette for quite a while.  Meanwhile I was doing my thing, just running along.  The heat was increasing and so were my cramps.  I made some adjustments to my electrolyte intake but was still on the verge of cramping whenever I really stressed the body.  It was a balancing act as usual.  I passed some others who had passed me way back so at least I was still gaining ground.  Still I was running a bit conservative trying not to blow up with cramping.  With about 5 miles to go Annette eventually caught up.  We ran together again for a while.  She was running in the top position for the women but had no idea where the next woman was.  We pushed on going back and forth but staying pretty close together.  With the final two miles to go, we took off at a good pace.  The course was more of a XC trail setting and not as technical so we could push the pace.  Without rocks to dodge, my feet felt much better so I was able to push even a bit harder.  I pulled ahead of Annette and was feeling good.  I ran to the finish line with a time that would be my longest 50 mile finish ever.  Still I was pleased that I was able to come back from such a bad start and even after getting lost for 20 minutes.  I finished 9th overall, first master and first in my age group.  Annette was only about 30 seconds behind me and won overall for the women. 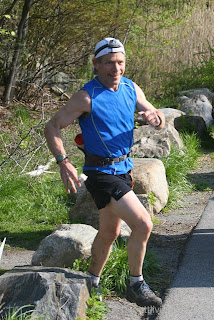 The Gear:  I ran in the Mizuno Cabarakan 2 shoe which performed excellent on the rocky course.  The Mizuno techie shorts and shirt also worked great as did the multi-purpose hat providing shade from the sun, a deflector from bugs and a sweat band.
Thanks to Northface for putting on this event!
Posted by Unknown at 11:42 PM