AND ONLY 2 DAYS TO GO UNTIL UTMB !

Being surrounded with mountains like this makes it real hard to be good and taper before a major race.  One has to do what one must do and for me I continue to be drawn to the mountains to explore.

Today started off with a late awakening to a beautiful morning again looking up at Mont-Blanc.  After a leisurely breakfast it was off to Chamonix Center to sign in for the race.  One of my hostel mates, Margaretha and I went over together on the bus. Upon arrival we quickly saw "the line".

Registration began at 10:00 am and I think half the competitors thought to come over at that same time.  In all it took about 2 hours to get through the process which included the passport check and then the gear check.  We had to sign waivers to verify that we had all the obligatory equipment for the race.  If found on course without, it could lead to a time penalty or disqualification.  At one point I thought I was being taken aside to have a blood test for doping.  I didn't quite understand what the person was saying in french so another came by to take me to the doctors.  I think it was about some form that was sent to me that I didn't fill out.  But as I was being taken away, another person came by to say it wasn't necessary.  I was relieved.  Needles are not my thing.  Afterwards we headed over to the Expo to check out some of the vendors and sponsors of the event.  I was hoping for better food samples but only managed to find some rather nasty tasting energy bars and some milky drinks that I wouldn't want to drink for even 5 miles.  Margaretha soon hooked up with a friend for lunch and I headed back to the hostel to plan my afternoon adventure.  With some minor difficulties like not catching the bus and walking around for quite some time to find the train station, I did make it back, only took an extra hour but in that time I become buddies with some guy at the train station.  He talked my ear off in french and never stopped, (he was also drinking capachino, must have been high test).  I just nodded and smiled most of the time until the train arrived and I was gone.

Back at the hostel I had a quick snack and decided to venture across the street to climb up towards Les Grand Montets, another mountain peak next to the Argentiere Glacier and just north of Mont-Blanc.  This was to be a full on uphill climb along a trail/mountain service road to the plateau and I had thought I might even take the cable car from there on to the top.  This would also be a great opportunity to help break in the new shoes which arrived on Saturday, the day before I flew out.  A new pair of the Mizuno Ascend 6's which have always treated my nicely, (Thanks Tina).  There was no running involved once I got to the hill, it was a power hike all the way up for a good 40 minutes.  I was dreading thinking about the pounding coming down, as I didn't want to crush the quads 2 days before the race.  I stopped in to see about taking the cable car up to the summit but of course was too late as the last car just made the trip.  I could also take the cable car down to avoid the downhill and the last car was available but no, I couldn't do that and decided to hang at this plateau where there was a full lodge and deck overlooking the valley below.  The sun was out so I just relaxed for a good 45 minutes enjoying the peace and the views. 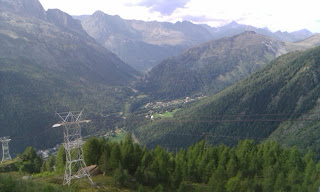 I finally decided it was time to go and found a possible alternative trail down the face of the mountain but in the trees with lots of switchbacks.  That would certainly be easier on the quads.  As I was heading down I ran into 2 English speaking climbers who were just coming down from the top.  They told me the Glacier was just over the horizon.  I hadn't yet been up close to the Glacier so without hesitation, I was heading up again in search of the Glacier.  The trail was much more reasonable and was only moderately going up and was mostly runnable.  After about 15 minutes I was perched over the massive Argentiere Glacier. 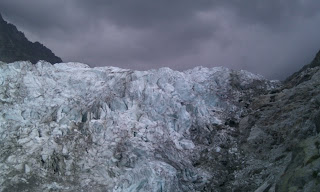 It was truly impressive and I could also feel the temperature drop as I approached.  I was hanging over the end taking pictures and enjoying the site when the rumbling started.  Another afternoon storm was approaching and I was totally exposed above the treeline.  Time to go as the rain started in and the lightening was getting more frequent.  I got back to the mid mountain lodge just in time as torrential rains, lightening and hail came down.  I knew the next trail section would be totally exposed as well so I made a good decision and hung out until the storm had passed.  I saw a break in the clouds and that was my Que to get going.  As I was starting I kept hearing music.  Nobody was in site so I figured I was just delirious and hearing things, it wouldn't have been the first time so I continued on.  As I made the cutoff to the trail down I saw a peculiar site, a line of some kind of animals for as far as I could see.  They were walking along this trail that I wanted.  I slowly approached and got closer only to see hundreds and maybe thousands of goats and sheep, many with bells on (The music I heard) on a hike down the trail.  I stood there for quite some time trying to figure this out.  Never seen this before, where is the herder and when will the line of animals end. 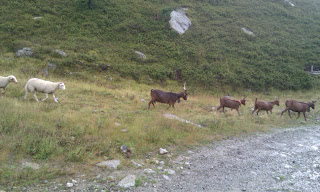 It never ended for the five minutes I stood there.  Many of the goats had these huge racks on their heads, looked like smaller moose antlers.  All I could think of was that I would get bucked and have stitches in my butt and not be able to race.  Finally I found a group of more friendly looking sheep and jumped in with the crowd as we ran down the mountain together. 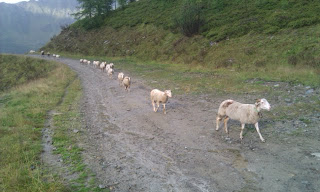 They were all right, not aggressive even the sheep with the horns and I even caught up to some goats and they were fine too so we continued on for quite some time until I had to turn off.  I said my au revoir and headed down the mountain to a long section of steep switchbacks to get me to the bottom, eventually.  At least it was in the woods and much softer than the service road would have been.  Finally I was out of there and just in time as another storm was brewing.  Within minutes I was back at the hostel.

Another fine day.  Tomorrow I will begin my taper, really. 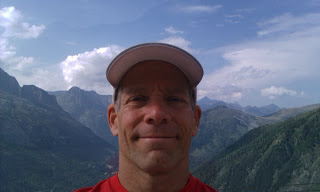