RUN YOUR CAN OFF 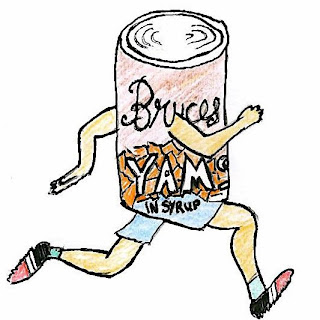 This is totally an event and not a race but also a test of endurance for many who try to run for up to 6 hours on a 1.25 mile course through the woods.  More importantly it's a fundraiser for the Winooski Food Shelf at a time of year when donations are desperately needed.  You can donate food for each lap you run or if you want to run for 6 hours, bring a whole turkey!  And anything in between including cash donations.  There's no entry fee and the entire event is run by volunteers with the help of donations from local and not so local businesses.  One aid station is fully stocked with various food and drink, again supplied by local businesses.  The only variable is the weather and this year it couldn't have been any nicer.  Temps in the low 40's, dry and some later day sun!

The event this year on it's 3rd anniversary was directed by Jen Sorrell who took over the reigns from Greg Veltkamp who happened to move to Alaska.  Jen had the enthusiastic help of Scott Barras to make this year's event the most successful ever.

At the start there were nearly 170 runners/walkers/trail strollers lined up on a chilly morning in the upper 30's with a brisk breeze.  At 9:00 am we were off and running.  Immediately you climb the biggest hill of the course but within 20 seconds you're at the peak and onto mostly flat single track.  The rest of the course is on mostly gently rolling trails with enough room on most to push a stroller equipped with fatter wheels.  Good enough for Todd and his coach Henry to negotiate.

I started off running with Joe and Mike and quickly warmed up, enough to get rid of a wind shell after lap  one.  The nice part of doing laps is being able to hit the aid stations frequently if needed.  And each time you ran through they counted your laps. 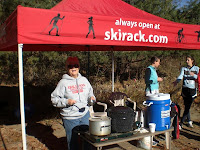 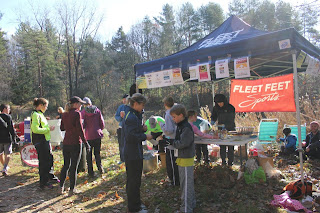 Soon Pablo joined up and we ran quite a few laps together.  With most of the leaves down much of the trail was covered so you couldn't see all the roots but Scott went out prior to the start to rake away any bad areas.  Still, I managed to find a few obstacles and crashed hard twice doing my tuck and roll to keep on pace.


The sun was shining and it was just a great day to run with friends in the woods.

At one point I came around a corner and found Paul down on the ground after just crashing on a root.  After a little chat we were able to get him back up and running again.  He's tough!


After about 4 hours and 20 or so laps, I started to feel like a hamster on a treadmill in a cage.  Once an hour I would stop at the aid station and refuel.  Sometimes I would run backwards or sideways to make it interesting and ran on and off with different friends and dogs throughout the day.  But I was also starting to feel a bit dehydrated and was getting some cramping twinges in my calves.  I made the mistake of going to bikram yoga the afternoon before, not even thinking.  Typically it takes me a good 24 hours to get back on track with hydration after a sweat-fest in bikram and I never do it the day before a race.  I managed to swallow a few electrolyte pills without gagging too much but the last one almost set off the pukes.  So for the last hour I took it easy and just kept doing easy laps.  At the end I finished with 32 laps or about 40 miles (Garmin miles whatever they are).  There were a number of other runners that completed the full 6 hours which was impressive including Pablo who also got in 32 laps.


In the end a lot of food was donated to help make Thanksgiving a little nicer for many families so thanks to all the runners who participated.  And thanks to Jen, Scott, Kristin and all the volunteers and sponsors who made this a great event.  Looking forward to next year!  For more information click here:  RYCO